It’s always a pleasure capturing the exhibitions of @byrdeyeviews The transformation of a space brings you into a different world and feel. Looking at art is one thing but being immersed in the atmosphere takes the appreciation to another level. Especially when it resonates with different elements we have experienced our whole life and can relate to growing up.

It was funny watching some people laughing at the pieces because they knew what it meant then watching others have such a serious confused look on their face, lost in the sauce.

A daughter said to her mother… ma we have all those products in our house what does that mean?

Seeing people come back into the space multiple times to just be… felt like they knew this was the one for them, for us.

It feels good to be seen.

I’ll be real, recording people with mask on and not being able to see em smile was awkward. I had to remember what some of yall looked like smiling. Hoping my enthusiasm made it pass ya mask looking for cheeks to rise and eyes to squint with a smile. I’ve been reading eyes and body language for a minute so that part isn’t unfamiliar but still I can’t wait till this phase of life becomes history. Either way I appreciate the vibes and the familiar feeling of people peopling.

Shoutout to @realplantsy for setting up the greenery and elevating the space with life as well as @kayashoots for providing the perfect chair! It all came together just right as it always does!

“Thought vs Everybody” — The Visual Reckoning A Short Film directed by Rodney Passé From the forthcoming Streams of Thought Vol. 3: Cane and Able from Black Thought and Sean C. Special thanks to Kings Theater in Brooklyn New York. https://ffm.to/thoughtvseverybody 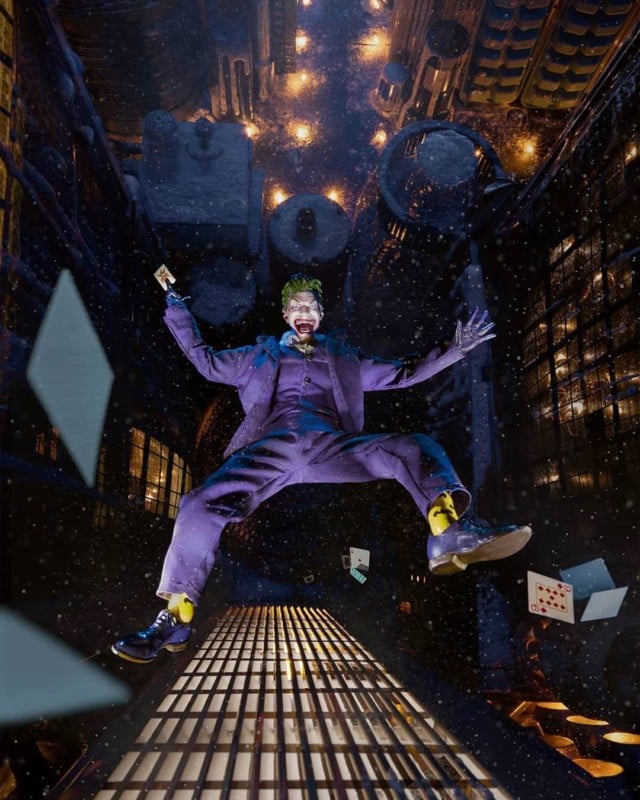 Editorial travel and commercial automotive photographer Arjun Menon has been exercising his creative muscles as of late by shooting cinematic scenes at home using action figures and household items.

“I was listening to this song […] when this idea popped into my head,” Menon says. “Joker falling down a skyscraper and yet showing no signs of fear or remorse! After all, being a sociopath comes with their own ups and downs.”

The above photo of Joker falling from a skyscraper was captured with an assortment of things, including an air conditioning cover and some computer equipment. Menon began by finding the long AC cover — it was long and symmetrical and would allow light to pass through, giving it the appearance of a tall skyscraper.

“I used its filters [for] the other two surrounding buildings,” the photographer says. “Found a few more things like keyboards, Bluetooth speakers, dumbbells as buildings. Then I made a road map with rice lights. Added candle LEDs as building lights.” 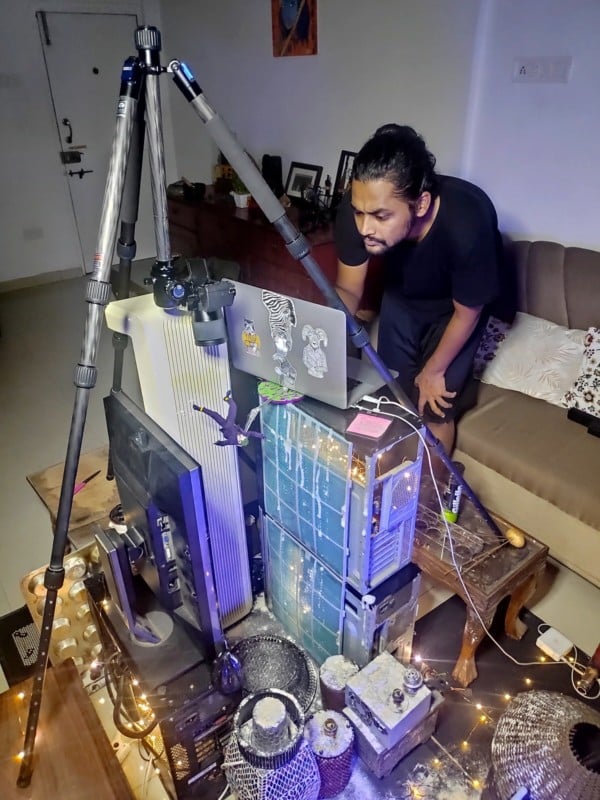 The snow on the ground was shaving cream and cornflour, and the snow in the air was hairspray shot with a flash. 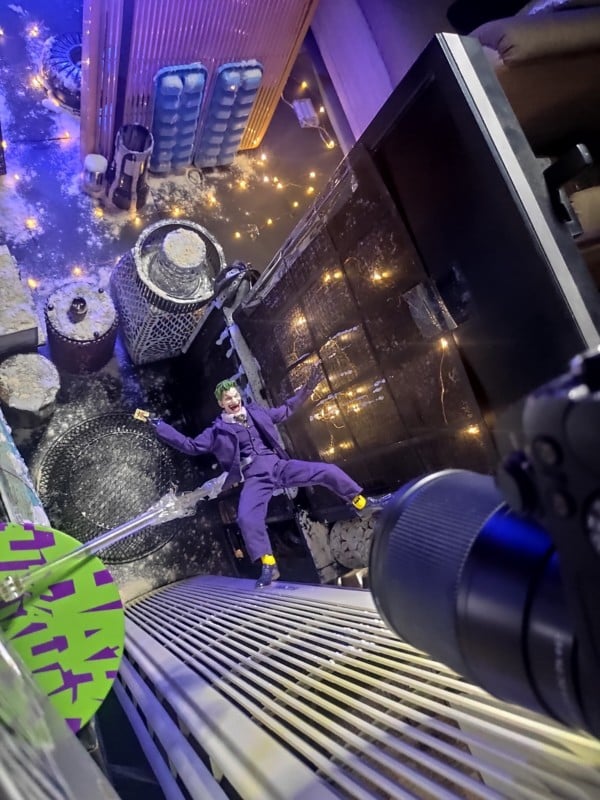 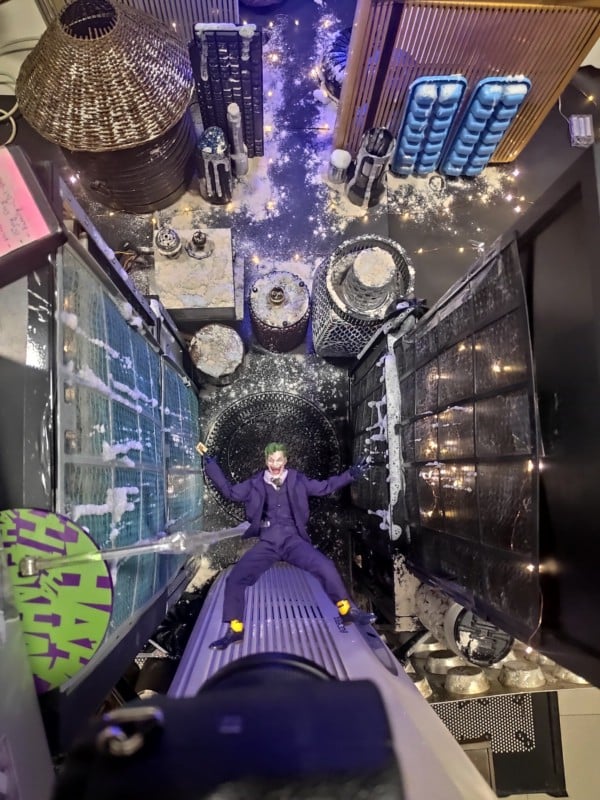 “Loved the way this shot came to life with practical effects,” Menon says.

When we have a quiet moment to ourselves, we sometimes think about the world we’ll leave behind after we’re gone. Will the world be a better or worse place when you’re no longer in it? That’s one of the questions that drives people to consider the impact they have on the environment.

Designer William Warren created a set of bookshelves that will last you a lifetime: they can be reassembled as a coffin. In other words, the ‘Shelves for Life’ is a piece of furniture that will follow you on your final journey.

“The wood will color, the surfaces will mark and stain, and over the years and the furniture will become a part of you,” Warren writes. “When you die, the shelves can be taken apart and reassembled as a coffin. The brass plate under the bottom shelf, that tells the story about this transformation, is then flipped over and your dates inscribed on it.”

Scroll down for Bored Panda’s interview with Warren. According to Warren, people, in general, were at first surprised and then amused by his design. “It’s not everyone who sees the charm but some do. People are very pleased when they realize the designs can be downloaded for free.”

The designer admitted that there have been critics who did not enjoy his work: “I offered the design to a Japanese company when I first made it but they really didn’t like the reminder of death. Since then, some squeal and some smile.”

Warren revealed to Bored Panda that he’s still busy working away as a designer. Among his recent projects, he designed all the furniture and interiors in a new children’s hospital in Edinburgh and new gates for Kew Gardens in London. “I’m also teaching design at several universities and developing other music and video projects.”

The designer added that “we are all going to die” at some point and there’s no need to ignore it or try to forget it. “If you don’t think about it in advance, you’ll be buried or burnt in a chipboard box with paper that looks like wood and plastic handles that look like brass. Your grieving family will pay £400 for this £40 piece of rubbish because nobody argues with an undertaker. Better to have something you’ve made, something solid and something that has lived with you in life and has the stains and scars to prove it.”

This is how you can convert the shelves into a coffin The eco-friendly shelves were first launched during the 2005 London Design Festival at the British Library and have made waves on the internet ever since.

Warren runs a furniture and product design consultancy, is a Senior Lecturer at London Metropolitan University, and also lectures at three other universities and colleges. His design philosophy is all about creating emotional experiences, making us think about our belongings, and his designs often feature humorous conceptual twists.

The designer has his very own set of ‘Shelves for Life’ and will send you a free personal design if you send him your measurements. According to Warren, these bookshelves will “store all your knowledge and prized possessions.”

Warren told the Financial Times that coffins are some of the most expensive pieces of furniture that people will ever buy while having the worst quality. “I’m happy for as many people to have mine as possible,” he said.

What do you think of Warren’s shelves, dear Pandas? Share your thoughts with everyone in the comment section.

Here’s how some people reacted to Warren’s design. A lot of folks loved the idea

Please donate to Food Hub: https://bit.ly/QuestloveYTFoodHub I’m raising money to support Food Hub to provide NYC students who depend on school meals who no longer have access. Let’s party. But let’s also help our fellow man. ANY AMOUNT can help.

In this episode of Streams Of Thought titled “Smoking Joints To The Last Poets”, Tariq holds a conversation with his dear friend, mentor, and noted artist Carrie Mae Weems. This interaction is an extension of Tariq’s and Carrie’s private conversations, so much so that Tariq never got a chance to ask his prepared questions. Watch as they discuss vanity, creativity and how they both enjoyed smoking joints while listening to The Last Poets”.

Please donate to Food Hub: https://bit.ly/QuestloveYTFoodHub I’m raising money to support Food Hub to provide NYC students who depend on school meals who no longer have access. Let’s party. But let’s also help our fellow man. ANY AMOUNT can help. Subscribe to The Roots’ channel: http://bit.ly/RootsYouTube 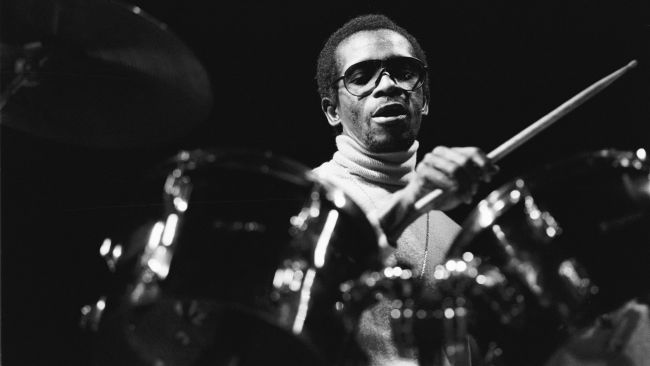 Even though he produced three beats for “Duckworth,” 9th Wonder had a realization during our interview. Three samples, three genres, three generations– Kendrick Lamar intentionally wove “threes all the way across.”

I’m raising money to support Food Hub to provide NYC students who depend on school meals who no longer have access. Let’s party. But let’s also help our fellow man. ANY AMOUNT can help. Please click here to help feed & shelter people in need across the USA: https://secure.actblue.com/donate/cor…